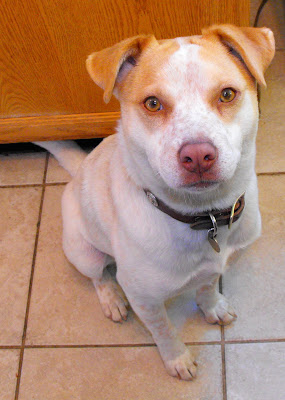 Meet Hank! Or, "Hankadoodle, The Hankster, Hankaroni, Hankalicious..." don't judge me... I grew up being referred to as Beastfish:) And "Roo", and....

So let's chat about Hank, shall we? Hank is somewhere between a year and a year and a half old, so he's fully grown and I'd classify him as "a medium sized dog on the small end of the spectrum". He's 30lbsish. He's all muscle and cute.

Hank is a mix of Cattle Dog and something... that something I personally would swear is Jack Russell Terrier. His build, the shape of his head, his ears, his determination to catch the squirrels... So if I'm correct, this makes Hank a mix of two incredibly wonderful dogs! That's pretty awesome:) Being a mix of these two also puts Hank on the smart end of the spectrum. He is quick to learn new tricks and commands. He is also quite cunning and very much like the kid you see studying the playground equipment trying to figure out how to get on the roof at the top of the slide. Dogs are like kids in many ways (in my opinion), and Hank would be the one that takes apart the remote to see how it works.

Hank is very gentle and plays well with others. He is currently running amok with our two boneheads (the dogs, not the kids... we have four of those) in the back yard with one ginormous stick between them. It's an interesting game of tug-o-war going on. Hank even likes our cat. He's not sure what to do with her, but knows that she is soft and if he sits on her, she makes a soft seat.
Hank LOVES to just sit and cuddle with anyone who will pet him. He totally zens out; eyes closed as he leans into you. It is adorable:)

Hank will be an excellent hiking and camping dog as Cattle Dogs are bred to be on the move. He's great on a leash and loves to go for walks.

Hank is house-broken and crate-trained and only chews on things he's supposed to chew on. He does like to hide socks, though! He doesn't chew them... just moves them around.

If you'd like to know more about Hank or think he's the dog for you, contact me at kelleyinco@gmail.com

Hank is available for adoption through New Hope at http://www.nhcdrescuecolorado.com/
There is an easy application process to go through. Check out their site as they have a lot of really great dogs up for adoption! All of their dogs are in foster homes, which we think is great. No scary shelters, lots of love:) 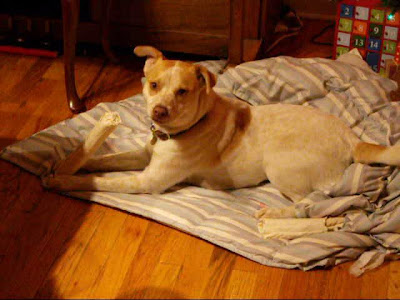 Posted by Unknown at 7:11 AM No comments: