You know that stuff I wrote about moving next summer? 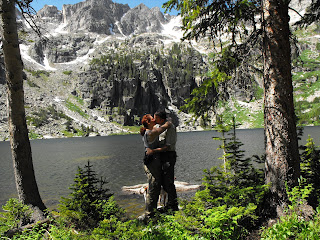 The hot boyfriend of doom (tm) and I trekked up to Crater and Mirror lakes last week. We spent several fabulous days together in a very small tent we had to share with a Rufus (the wondermutt). I kinda wish we were still there, although I very much enjoy sleeping in a regular bed...with the Rufus underneath it instead of sprawled across our legs.
So that whole "hey let's wait until next summer to build on" plan got modified a bit. We're still building and it'll still take place then, but we've decided to completely test our sanity by moving in together now. This means six people and one bathroom. Oh yeah baby! I think I've mentioned two of this six are teen girls? A constant hot water heater has just bumped itself up to first place on the priority list.
I have been wandering around my house trying to think of what to move first, what I can get rid of, how we will manage to do this in less than a month and how thrilled Tasha is going to be now that there will be a cat under her roof. I am certain Oreo (the cat who at least makes an attempt to like people) will totally dig all of the attention she's about to receive.
We're hoping to be done before school starts (August 19th) and I'm a bit nervous. I've got a lot of cakes to create this coming month and there's one in particular that's going to take some serious engineering and a couple of trips to the hardware store. I work well under pressure, though.... always have. Which is why I'm sitting here blogging instead of packing or baking:)
I'm rather giddy... nervous, but giddy. I keep thinking I should pinch myself. Is this really happening? I have a feeling this boyfriend of mine will continue to surprise and thrill me for many, many years to come. He's just that kind of guy... which as I've stated before, makes me one very lucky gal!
Posted by Unknown at 5:57 PM 1 comment: 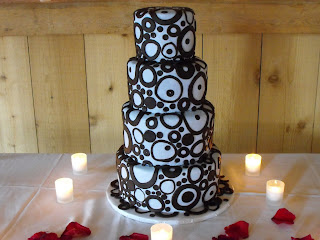 I thought I'd share a bit of what I've been up to lately. It's been busy! These are now on my "favs" list. I really love the chocolate circles! The groom's cake was a blast to make.... even has edible coins to represent the change that falls out of his pockets whenever he sits down:) Cute!!!!
Posted by Unknown at 5:52 PM No comments: