Where to begin? I've started this blog a few times and it just sounded weird, so I deleted it... but their story is so darned wonderful I have to post something about it!
Jane and Erin are getting married soon! Jane and Erin have known each other since 7th grade, though didn't start dating until our 20th high school reunion in 2007. I've known them just as long as we all went to the same schools. Jane and Erin were alphabetically next to one another in all of the yearbooks... this story just went up a notch on the cute meter, didn't it:) 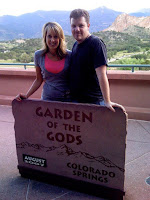 I knew Erin well in high school as we ran with the same crowd of oddballs. We were theater and music folks, and one of my most favorite memories of Erin was when he and my boyfriend would trade one Converse shoe and wear ties around their heads. I loved how silly they were! I didn't know Jane as well back then--- she was gorgeous (still is!), popular, athletic and very sweet.
Jane and Erin are all grown up now, with children from previous marriages and careers they love. Jane is an interior designer and founded Snob Interior Design in Colorado Springs, CO. She works out of What's In Store with her sister on Tejon St.
Erin is a jack of all trades... I recently blogged about his page-a-day novel (which you should all be checking out!). Alongside the writing, Erin paints, develops websites, created "The Dating Code" blog and wrote "Emotion: The Energy of Romance."
Recently Erin asked me to make a cake for their combined birthday party, but wanted me to focus on Jane, so we decided on an edible Chanel purse. Jane LOVES all things Chanel. Chanel, if you're listening, you should seek out Jane:) I wanted to add a special element to their cake and thought of the yearbook pictures... and this is where the story gets a little crazy for me....
I burned my junior high yearbooks back in 88 in a bonfire my roommates and I set on the sidewalk out in front of the house we were renting. At the time it seemed like a good idea, though I regret it now, as I think my kids would get a big kick out of how dorky I was.
I needed to find pictures, though, and after running into dead ends with old friends, I wrote to the junior high (Horace Mann... aka HELL)librarian. I told her about Erin and Jane and how I'd set my own books ablaze and asked if there was any way she could scan and email their pictures to me. She wrote back promptly and was more than happy to help out! Yay! Then she wrote me again and said she found something odd... MY 1984 yearbook on their shelf! MINE? No way... it's a cinder. She says, "No, I am positive it's yours and she emails me a scan of the inner front cover." Jaw drops here... how can this be?? I SET IT ON FIRE! Crazy! Unfortunately my odd luck did not carry over to a winning lotto ticket, but hey...
Back to Erin and Jane-- I made a black forest cake and turned it into a quilted Chanel bag, then added a little edible charm bracelet with their yearbook pictures in the charms. It was so darned cute, if I do say so myself! 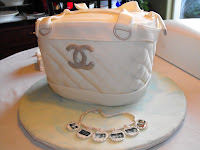 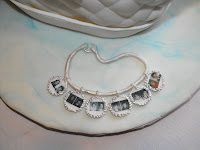 Their birthday party was a lovely gathering of old friends and new: Kellee (my best pal since age 11)and her fabulous girlfriend, Kim, Leslie and Rob (high school sweethearts who have been married for 22 years)and Pete (one of Erin's good pals from h.s.). For me, it was such a treat to introduce the hot husband to some wonderful people I've known since the days of button down Levi's and big feathered hair. For all of us, seeing Erin and Jane together and so blissfully happy was the best part of the evening. We all wish you a plethora of delightful years together. Erin, you need to hurry up and lock that down already! Jane, you're just fantastic, and it has been such a pleasure getting to know you:)!!! 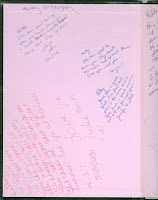 Fun and fancy wedding and groom's cake for a Breckenridge wedding!

Last Saturday I had the honor of making Jenny and George's wedding and groom's cakes. What an absolute joy they were to work with! Jenny and George were planning their wedding long distance, and there was a whole lotta emailing going on. Jenny sent me some fabric samples and sketches she created and I got to let my imagination run wild. She wanted a "watercolory" look with a mountain theme for the wedding cake. This is what we came up with:) (the flower girl was keeping an eye on the progress) 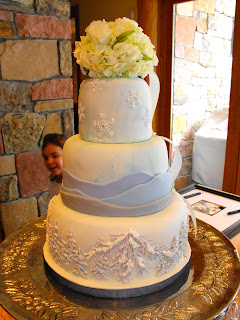 The groom's cake was a surprise for George-- it's his favorite red truck and all of their pets and was entirely edible. Jupiter is the pup on top, who recently died. 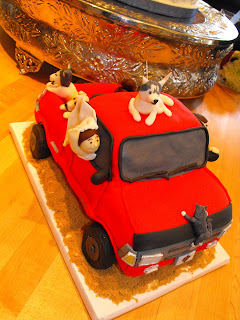 Posted by Unknown at 3:38 PM No comments: